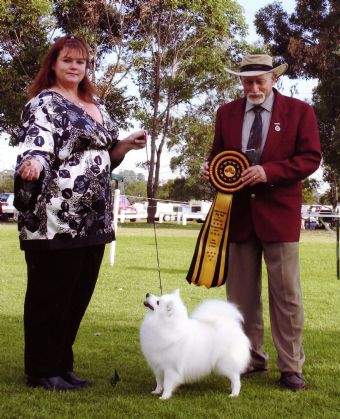 I was SOOOO lucky to buy this BEAUTIFUL female from Amanda at Daesdaemar Kennel in Australia. Bronte has an english father and a mother who has some of the lines a fewe generations back, that i also have on Harry and Kiwi. It will be very interesting to se what she can do for the breed in future mixed to this and all my other lines.
Thank YOU SO MUCH Amanda for giving me this oportunity to, show and breed with this beautiful girl. I am so grateful to you !!!!!!

COPY from Amandas homepage about Brontes showlife in Australia 🙂
My beautiful Bronte is litter sister to the well performed Orlando (Aust Grand Champion Daesdaemar Lovers Lane)
Bronte has many class in group wins to her name and holds her own against the boys, winning Best of Breed on quite a few occasions. She was Challenge Bitch at Sydney Royal 2004 aged 13 mths.

More Royal Challenges in 2005…so far both Canberra and Sydney!!

Best of Breed at both RNSWCC Classic and RNSWCC Spring Fair in 2005.

Also Runner up to Best in Group at 2006 Australia Day Show.

After a break from the show ring for maternal duties, Bronte is back, ready to strutt her stuff again. From her litter on 3rd March 2006, sired by Ch Daesdaemar Brother Bear, watch for the very exciting Champion Daesdaemar The Legacy «Patrick»!!

Bronte is now well on her way to becoming a Grand Champion. She has had a string of class in group awards and has also clocked up Bitch Challenge and Runner up to Best of Breed at both Canberra and Toowoomba Royals in 2007!!

3.6.2007 BRONTE WINS BEST EXHIBIT IN SHOW TODAY AT THE ASIAN BREEDS DOG CLUB OF NSW
Bronte achieves her Australian Grand Champion title 22.7.2007!! She has enjoyed great success in the showring, and has earned this title while showing alongside her brother Orlando, Grand Ch Daesdaemar Lovers Lane …and has managed to knock him off on quite a few occasions!